Jihadism dates back to the ’20s, a period when totalitarianism was not restricted to Islamic contexts. For various historical reasons it comes to a head in the 2000s and feeds on the powers that oppose it.

Of the four caliphs that succeeded the Prophet Mohammed, three were murdered. The power struggle that Islam has experienced since its earliest beginnings is far from the idyllic image that some Muslims, especially the most orthodox, have of their religion. The jihadist ideology for example, is based on the possibility of going back in time to the ‘golden age’ of the prophet and his followers.

The idealization of the past is the main doctrine of a vision of the world that has been unable to assimilate, rejecting the changes of the modern reality of Islamic society. It is an expression of the frustration experienced by a part of the Arab world incapable of keeping up with global transformations, one that remains, therefore, on the margins of history. What the Western press, especially the Italian press, considers a danger is really no more than a problem, albeit a serious one, that should be faced in a lucid manner.

Jihadism and its violence often distracts from the genuine dangers that we actually need to be conscious of today. In order to focus on the real danger, it is necessary to view jihadist ideology, which is no more than an extension of political Islam, within its historical and social context.

It all began with the Muslim Brotherhood, which was established as a secret association in 1928 in Egypt, just a few years after the fall of the Ottoman Empire. The British occupied the country and the Western presence was experienced as an imposition of foreign values that aimed to destroy Islam.

Viewed internationally, this was the same period in which fascism and Nazism began to attract followers. The nationalist conception of these two movements certainly influenced the ideological vision of the Brotherhood, but there was a very important difference. Nationalism for the Muslim Brotherhood was not just a territorial projection: it was a religious identity.

The organization, seen by many observers as a populist movement, has never dropped the motto that summarizes its ideology: “Allah is our objective. The Prophet is our leader. The Qur’an is our law. Jihad is our way. Dying in the way of Allah is our highest hope”.Could they be any clearer?

Although this Islamist movement was founded by Hassan al-Banna (1906-1949), the supreme ideologue of the Muslim Brotherhood was Sayyid Qutb (1906-1966). His work is a genuine manifesto for political Islam. Qutb believed that Islam was in crisis because millions of people that claimed to be Muslim actually understood very little about their religion.

To put it simply, they were not real Muslims. It was deemed necessary, therefore, to return to the original values of the religion, the real values. In order to guide the masses, an elite was required that could perform the same role that the followers of the Prophet fulfilled during the dawn of Islam. In numerous books, Qutb referred to this elite as annawâteassalba (literally, the “hard nut”). Therefore, the aim was to re-Islamize society because Islam was the solution for all political, economic and social problems. This provided a simple and clear discourse that cut straight to the heart of a society that felt it was the victim of an international Zionist plot. The logic of the conspiracy is, in fact, an integral part of Qutb’s ideological vision.

The references that Qutb made to the Quran, and especially the interpretation of surahs, or chapters, 57 (al-Hadid) and 112 (al-Iklhas), earned him a reputation as the father of the interpretation of apostasy (al-Takfir). Qutb justified the use of violence and terrorism against non-Muslims and apostates in an attempt to hasten the kingdom of Allah. It is thus no coincidence that names such as Osama Bin Laden, Ayman Al-Zawahiri and Abdullah Azzamare among those that have put these principles into practice through the creation of terrorist networks with truly global scopes.

Jihadism as we know it today is no more than the fruit of a totalitarian doctrine that uses religion to conceal its own political objectives and struggles to obtain power. Such a doctrine considers all of modernity to be a danger because it is seen exclusively as the fruit of the evolution of Western culture, which is perceived as an antagonist of Islam. Such sentiments find significant ideological support in the literature of the Muslim Brotherhood.

This ideology also finds fertile ground in the reality of Islamic countries because the West is unable to find a non-military ‘remedy’ for local problems. The dominant culture in Muslim countries wants religion and government to be one and the same. This fact is most immediately useful for those who wish to use their faith in order to obtain power. The transformation of the revolts of the Arab Spring into Islamic revolutions, for example, was facilitated by the ambiguity of secular political forces. Called upon to propose a political project free from any religious connotations, they were unable to do so. Even today, they cannot promote secular politics without being viewed as a fifth column for the Western enemy.

When in an editorial on 11 July 2013, Le Monde claimed that “Islamism is not a project for government”, it failed to acknowledge that there are two countries in the region that, in spite of the great differences between them, are governed by this ideology: Iran and Turkey.

Turkey, constitutionally speaking, is both democratic and secular and belongs to the Sunni majority. Meanwhile, Iran is the heart of Shia Islam and represents a theocracy par excellence. But how can these two countries that are so different, with political disagreements that have never been concealed, share the same ideology?

Turkey’s Adalet ve Kalkınma Partisi (AKP), or Justice and Development Party, in government in Ankara since 2002, was forged in the tradition of political Islam but has moderated somewhat in order to find its place within a conservative democracy. For this reason, there are many who claim that the AKP has a hidden agenda that coincides with that outlined by the Muslim Brotherhood.

The party’s founder and current national president, Recep Tayyip Erdogan, was imprisoned in 1998 after having been found guilty of inciting religious hatred by publicly reciting the verses of poet Ziya Gökalp who wrote, “the mosques are our barrack the domes our helmets, the minarets our bayonets and the faithful our soldiers”. Since coming to power, and after having rounded off some of the spiky edges of his discourse, Erdogan is viewed by some as having done little more than seeking to undermine the secularity of the state.

In the case of Iran, at first glance, it is very difficult to perceive any type of connection between the Muslim Brotherhood and the Islamic Republic. Indeed, the Brotherhood’s theological source is Sunni radicalism, while Iran is the home of Shia Islam. However, the connection exists, and we can find it in Khomeini’s revolution.

Michael Prazan, writer and director of the documentary Muslim Brotherhood: the ultimate totalitarian ideology, explained that, in spite of the theological and religious differences, from an ideological point of view, there are very few differences between the Iranian Islamic revolution and the Muslim Brotherhood. In 1954, the famous Iranian cleric and activist Navaf Safavi(1924-1955) headed to Cairo at the invitation of Sayyid Qutb. Safavi had read all of Qutb’s works and shared his ideas, including those concerning the re- Islamization of society. At the end of his journey, Safavi decided to change the name of his movement from Fedayeen dell’Iran to al-MuslimeenIkhuan (the Muslim Brotherhood). Safavi was to introduce the Brotherhood’s ideas to the leader of the Iranian Revolution, Ayatollah Khomeini. The latter often quoted Sayyid Qutb in his speeches.

The current leader of the supreme Iranian Revolution, Ayatollah Khamenei has translated two of Qutb’s most important books into Persian. These two volumes have been widely distributed in Iran and are considered to be among the most widely read Islamic books today. It is no coincidence that the ideas of Sayyid Qutb can be found in the fundamental principles of the Islamic Republic of Iran. The pragmatic or ‘moderate’ face of political Islam cannot hide from the fact that modern jihadism is the fruit of the same seed. Al-Qaeda, IS, Boko Haram and all of the violent movements that refer to the Islamic religion are no more than different shades of an ideology that is gaining ground every day. Unless a global vision is able to understand the root of the problem, all of the military efforts – if not accompanied by a valid cultural project that highlights the complexities and genuine conflicts and difficulties of the Middle East situation – will be not be sufficient to fight the cancer that, for the moment, is devouring the majority of the Islamic Arab world. For the moment. 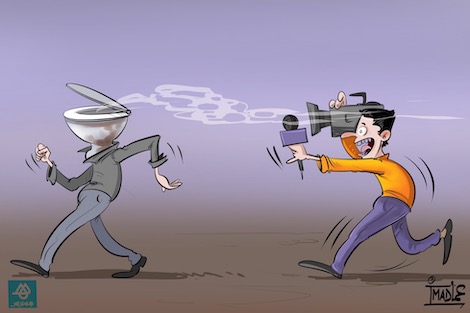